Kubu Island is a scenic outcrop of granite in the middle of the endlessly flat Botswanan salt pans, a magical camping spot unlike any other. Our guide will tell you how to make most of your stay on the island.

Kubu Island is in the middle of the Botswanan Salt Pans, a small island sticking out into Sua Pan. It’s about 4 hours drive south from the A3 highway between Maun and Nata, and 2-3 hours drive north from the A30 highway near Orapa.

Kubu Island (also known as Lekhubu) is a granite rock outcrop roughly 2 billion years old, a rocky landscape unique in Botswana. It is now only a true island for a few months per year and sticks out into the flat surrounding Sua Salt Pan. It’s a national monument and sacred to the locals. You can really feel the mystery of the place when you’re there, with huge twisted baobabs growing out of fantastically shaped rock formations.

Along with baobabs are amazing star chestnut trees, and fossilized guano (bird poo) on the rocks from waterbirds that perched here thousands of years ago.

On this island ancient tools and signs of early humans have been found, dating to over 100,000 years ago. There is also a 1 m high C-shaped stone wall and many cairns, perhaps dating from the same time as Great Zimbabwe, about 14000-1700 AD. The island is considered a sacred site by the local community, so be respectful and leave only footprints.

Most people who visit stay overnight at Kubu Island Campsite (Website). The website is good and often has updates about road conditions, including when the campsite is unreachable due to flooding.

We drove to Kubu from the north and exited to the south, spending one night at Kubu Island. I think one night was enough since we arrived early to explore the rocks and hills and enjoyed a beautiful sunset. We also spent a little time the following morning watching sunrise and admiring the scenery. Make sure to arrive in good time to enjoy an afternoon walk before a sundowner overlooking the pan and the magnificent rocks.

I captured our many adventures in a travel book, check it out on Amazon*.

South Africa was kicking us out so we had to make a plan. ‘What about Botswana?’ A few days before we overstayed our visas, we hit the road in our trusty Defender and sped north from Cape Town.

When booking camping, you can request a guided tour. A guide will take you around the island and explain about the rock formations, flora and fauna, and history of the area. Guided walk rates: P60 +VAT per person.

How to get to Kubu Island

The tracks are mainly sandy single-spoor and you need a 4×4 to visit Kubu Island. Remember to deflate your tires and pump them up again when you return to the tar.

It’s impossible to reach Kubu Island in the rainy season. Contact the Gaing O Trust, who manage the island (see contact details), to find out the current road conditions. If you’re unsure, it’s also a good idea to ask at your previous night’s accommodation to see if they have any tips. We visited on 5th May and the driving was fine, though originally we planned to visit two weeks earlier and were told the route was impassable.

The route from the north is more difficult, mainly due to navigation, and takes about 4 hours with 90 km driving along sandy tracks. The route from the south is much easier with a single obvious track, and only 47 km of sandy track driving. We headed right through, from north to south, spending one night camping at Kubu Island.

It’s essential to have some online navigation system as well as a paper map, for example Tracks4Africa or Maps.Me. Neither will have all the tracks but at least you will be able to pinpoint where you are using GPS.

Never drive over the pans if wet. You will get stuck, and maybe your vehicle will spend the remainder of its days in this beautiful, harsh wilderness.

Kubu Island from the North

The route to Kubu Island from the north starts from the main A3 highway between Maun and Nata and takes about 4 hours. Unlike most highways in Botswana, this section or tarred road is very potholed in places. It’s about 90 km from the turnoff along sandy tracks, parts of which are fast and parts overgrown.

We took the route from near Mabole, 17 km west of Nata. One track, signed ‘Lekhubu’ and ‘Kubu Island 95.1 km’, starts off by immediately going across a tiny little pan, which was flooded when we were there (5th May). We took a different track about 1 km further west which avoided this water crossing and met up with the original track 2 km later. Both these tracks are white-brown dashed on Tracks4Africa.

From this point we had no more trouble with water, only with navigation and overgrown tracks. There are no signs but many small tracks branching off, which sometimes peter out into tiny walking trails. What appears to be the ‘main’ track can also end rather abruptly, so we had to do a bit of backtracking. Often the track was overgrown with acacias which scratched our car, but we had been to CKGR so no harm in a few more scratches. There are sometimes kraals and homesteads not far from the road, so watch out for domestic animals.

In wet season, if there’s a chance the roads might be wet and muddy, it is better to travel in a convoy. There isn’t any phone signal, so it’s a problem if you are stuck. There are a few local villages nearby where you might be able to ask for help.

The pans in particular can turn very, very sticky and glue your car into the pan. The surface may look hard, but in reality, it may be a thin crust with gooey, sticky clayey mud below. It’s hard to test because you jumping on it isn’t the same weight as a car. When dry, the tracks are fine.

Don’t expect to reach Kubu Island in the rainy season. You might be able to make it almost all the way, but as the name suggests, Kubu Island can become a real island.

Don’t take the track along the edge of the pan unless you really mean to and know the dangers. The pans can look dry on the surface, but be wet underneath and suck your vehicle down to its final resting place. If you do take this route, you’ll eventually reach a vet fence and turn west for 9 km to then continue on the main track south.

Don’t drive directly from Gweta, again unless you really mean to and know what you are doing. Unless the pans are very dry this route isn’t possible. It’s not an advisable way.

Kubu Island from the South

The route from Kubu Island to the south is much easier than that to the north because there are far fewer navigational issues. We left the island this way and had no problems with either the road conditions or route finding.

From the A30 to the south of Kubu Island, take the tarred road to Mmatshumo village, 22km away. Here the tar ends and the sand begins. There is a sign for ‘Lekhubu’ and you continue straight onwards.

About 5 km later, you’ll see a viewing tower at the edge of the track. There are ok, but not amazing views of Sua Pan from here. 16 km later you’ll reach a vet fence gate, and in a further 7 km (28 km in total from Mmatshumo), take the track bending off to the right. It’s about 16 km further along this track to the island, over small pans and little grassy islands.

You can book Kubu Island via their good website. We booked but didn’t pay in advance as we weren’t sure if the tracks would be passable. We paid in cash on arrival.

Kubu Camping Fees: P60/100/150 for local/SADC/international per person per night with children under 14 half-price and under 9 free. Plus 14% VAT and levy of P10 per person.

Firewood P20 per bundle. A tent, 2 mattresses and a light can be rented for P255 per night.

Camping is the only option at Kubu Island, there is no lodge. Makgadikgadi Adventure Camp 25 km to the north is a second option if you can’t reach the island. This camp is a bit barren and definitely the lesser option.

Kubu Island can be busy in the winter months during South African holidays, but you might be the only campers there on the edge of the summer season. When we were there, 5th May, we had the place to ourselves.

There are thirteen campsites at Kubu Island, some more spaced out than others, with a few drop toilets scattered between the sites. Our favourite site was number six, at the northern end with views over the pan. Apart from the bush toilets there are no other facilities, so bring everything you need with you.

Bear in mind that the campsite fees don’t include VAT (see above). We also saw a small charge on our receipt for a mystery ‘viewing deck’ which we actually found when heading south the next day (I think).

Things to do at Kubu Island

A highlight of Kubu Island is just being in this magical remote wilderness. The sunsets and sunrises are amazing, so make sure to arrive in time to relax before a sundowner. When the sun sets, the stars come out and they’re beautiful.

Another highlight is hiking and exploring the fantastic rock features and landscape. There are no clear hiking trails but you can walk anywhere. Big dangerous animals are rare here, though watch out for snakes and there are rumours of occasional elephant dung so never be too complacent.

From the hilltops there are panoramic views, although they only rise 20 m above the surrounding plains. Walking around the island alongside the pan allows you to see super cool rock formations and amazingly shaped trees.

I hope you enjoyed this guide to Kubu Island!

To visit Kukonje Island (aka Kukome Island), a similar island to Kubu, see our Botswana Salt Pans overview. Or, check out our guides to Nxai Pans and Makgadigadi Pans.

Kubu Island was one of the last stops in Botswana on our two-month road trip which you can find out more about by reading the travel adventure book I wrote, No Footprints in the Night: On Safari in Botswana*. The cover photo was taken at Kubu!

What does Kubu mean?

Kubu means ‘large rock’ in Kalanga and ‘hippo’ in Tswana. Probably the island is named after the former because I’m not sure if there were ever hippos here.

Where is Kubu Island?

Kubu Island is in the middle of the Botswanan Salt Pans, 4 hours south from the A3 and 2-3 hours north from the A30 along sandy tracks, impassable when wet.

Yes, you definitely need a 4×4 to reach Kubu Island.

When is the best time to visit Kubu Island?

When the floods have gone down, from May to October, is the best time to visit Kubu Island. For a few months of the year (Nov-Apr) Kubu Island is unreachable as the tracks are too wet and muddy. 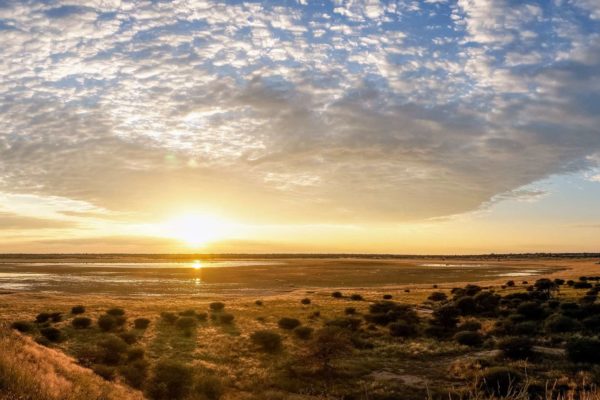 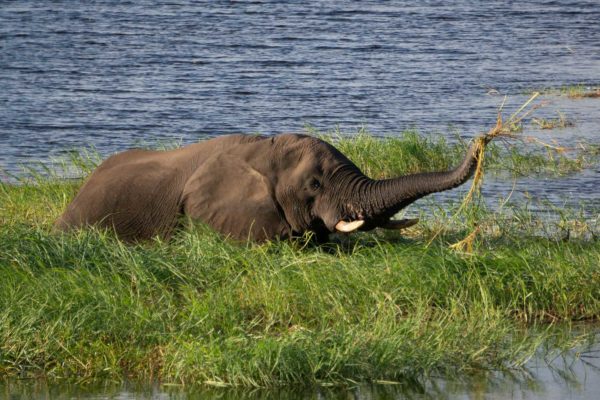 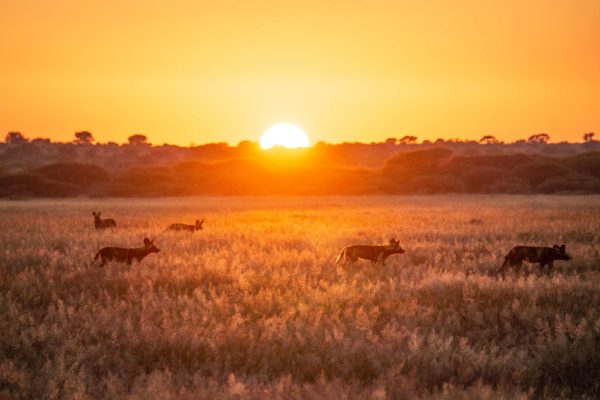 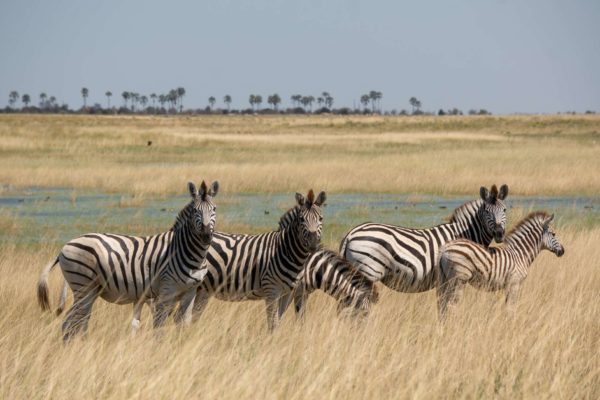