Hue Imperial City is a well-preserved complex of temples and palaces on the banks of the Perfume River in Hue. Explore it on this walking route.

How to get to Hue

Hue is a city in central Vietnam. It’s about 120 km, or 3 hours drive, north of Hoi An. There’s a train station near the centre of Hue, making the train a convenient option for getting to the city. To book train tickets, 12GoAsia* is the easiest way. You can see which trains have space available and get ticket confirmation immediately after booking. It’s about 13 hours from Hanoi or 11 from Ninh Binh, with the sleeper trains an efficient use of time.

Within Hue, the Citadel is the name of the large historic area, roughly 2.5 x 2.5 km lying on the northern bank of the Perfume River. This is where the population used to live and it’s protected by large moats and city walls punctuated by impressive gateways. In the centre of the Citadel is the Imperial City, or Imperial Enclosure, which covers about 700 x 700 metres. This is where the important sights of Hue are, and where the royal family and important officials lived and worshipped. And within this, is the Purple Forbidden City. This is where the Emperor himself lived with his concubines, however today nothing much remains here.

Key Information: Tickets are 150,000/30,000d per adult/child. If you’re also going to visit the Royal Tombs you can get a good value combination ticket. Ask at the ticket office. Hue Imperial City is open from 7 am to 6 pm every day.

On this walking tour you’ll see the main sites and attractions within Hue Imperial City:

This is a self-guided walking tour of Hue Imperial City. Alternatively, you can book a guided tour of the area*.

Inside the Imperial City are temples, palaces, residences, gardens and big walls and gates. Much of it was destroyed by French and American Bombs and some parts are undergoing renovation so some areas may be closed when you visit.

This walking tour starts at the ticket office to Hue Imperial City, which is at the southern end of the complex not far from the river. It’s about 2 km from the eastern centre of Hue where most of the hotels are, and you can easily walk along the river and across one of the bridges to get here.

The Ngo Mon Gate is the main entranceway to Hue Imperial City. It’s been very well restored and is gleaming with regal colours. Only the Emperor was allowed to walk through the middle of the three archways but now anyone can. Upstairs you’ll find a huge drum and bell as well as a few minor exhibits. You can also see over the rest of the Imperial City so it’s a good place to orient yourself.

Directions: After exploring the Gate, continue up the centre of the City to the large pavilion in front of you.

Thai Hoa Palace is a large central building just inside the gates. Don’t miss the beautiful red columns and elegant doorways. This palace dates from 1803 and has recently been renovated. The Emporer came here for official visits and meetings. There is a large throne here on which the Emporer sat. You can’t take photos here. There’s an exhibit here about Hue Imperial City, which makes an excellent introduction to the historic complex.

Directions: Pass through the palace and into the courtyard on the other side.

The Mandarin Halls are two identical buildings on either side of the large courtyard. There are exhibitions inside with photos, Buddha statues and more.

Directions: Head further up the centre, and choose to walk up one of the galleries on either side of the grassy area.

4. Long Galleries of Can Chanh Palace

Can Chanh Palace is now ruined, but two long, symmetrical galleries on either side of the area have been restored. These are really beautiful, with deep red columns and doorways, with carving details highlighted in gold.

Directions: At the end of the galleries is the Purple Forbidden City.

Little remains of the former glorious Purple Forbidden City, the residence of the Emperor himself. It was destroyed during the War and the rubble is now mainly overgrown with plants. Parts of the walls remain.

Directions: Head right (east) from the centre axis to reach the next stop.

The Emperor’s Reading Room is an exquisite little building and miraculously survived the wars fairly intact. There are some dark little exhibitions inside, but the symmetrical and colourful outside is the main attraction.

Directions: Walk onwards into the area of buildings to find the Royal Theater.

The Royal Theatre is a beautiful building. It’s still used and you can watch performances here twice a day for an additional fee. Enquire when you buy your entrance tickets. When it’s not in use, you can still go inside and look at the displays of theatrical instruments and costumes.

Directions: Head out east to a main walkway. There’s an entrance gate from here to the gardens just further up.

The Co Ha Gardens are always a peaceful part of the gardens, though there is little shade so it can be hot. There’s a lovely pavilion overlooking a lake in the centre, and there’s also a viewpoint up a small path by a tree in the northeast corner.

Directions: Leave the gardens the way you came in and turn right along the walkway. This leads to the Back Lake and as you turn left you’ll see the Tu Vo Phuong Pavillion across the water to your right.

Tu Vo Phuong Pavillion is at the far end of Hue Imperial City, across a lake and just before the defensive walls and outer moat.

Directions: Continue on the route along the lake. Turn left and there’s an entrance gate to the next stop almost immediately on your right.

In the peaceful northwest corner, the Truong San Residence sees few visitors but is a lovely spot. It’s surrounded by a wall with a beautiful entrance gate and then a winding moat on the inside.

Directions: Leave this walled area and turn right. Take the next right and you’ll be in the Dien Tho Residence.

The Queen Mother lived here and it’s been mainly restored, though there are still signs of a large fire. Some of the large halls now contain exhibits and photos and you can see luxurious clothing. There’s a cafe within this complex, a beautiful spot by a pond full of lilies.

Directions: Leave the complex and turn right. Take the next right and you’ll soon see an impressive gate on your left.

In the southwest corner, a collection of temples. The Mieu Temple Complex has been almost entirely restored and is a very beautiful area of Hue Imperial City. Don’t miss the nine large bronze urns between the temples. These are each dedicated to one of the nine Nguyen Dynasty Emporers and date from 1835.

Directions: After passing through the temples, leave the area through the southern gate. Head left and walk back through the centre of the area. Walk along the main route heading to the eastern gate (Hien Nhon Gate). You’ll see the Royal Treasury on your left.

Look at this dilapidated building from the outside.

Directions: The Hien Nhon Gate is at the end of the walkway.

An ornate gate on the eastern edge of Hue Imperial City. You can leave but not enter here.

Directions: Leave the Imperial City through the gate and across the moat. Turn right then take the next left to reach the Museum.

A museum associated with the Imperial City, displaying various royal items, from chairs to clothing and jewellery.

Directions: The Museum is the last stop on this Hue Imperial City Walking Tour. To return to the ticket office, head back to the moat and follow it left. Else walk or hail a taxi to take you onwards.

Other Things to do in Hue

Moving on from Hue

If you’re heading north, why not visit the spectacular countryside of Ninh Binh. You can easily reach Ninh Binh or Hanoi on the train from Hue, with the journey times about 11 and 13 hours respectively. The overnight trains are relatively comfortable, save time and also save one night’s accommodation. It’s easiest to book on 12GoAsia* since you have to have a Vietnamese credit card to book on the official website.

From Hue, if you’re heading south then Hoi An is a common next stop. Public transport between the two cities is not that convenient. It’s much more popular to book a car or motorbike with a driver* and be driven between the cities via the Hải Vân Pass.

For more ideas of where to go next, check out our Vietnam Guide.

Guidebooks to explore more of Vietnam

Useful things for a holiday in Vietnam

Why is the Imperial City of Hue important?

The Imperial City of Hue is important because it was the capital of Vietnam for almost 150 years, from 1802 to 1945 during the Nguyễn dynasty. The Emporer lived here in the historic city complex and several royal tombs dot the surrounding countryside.

How big is Hue Imperial City?

Hue imperial city covers an area of about 700 metres by 700 metres. The moat around the City is about 2.5 km long. It takes at least half a day to explore.

What is Hue Vietnam known for?

Hue in Vietnam is known for its historic Imperial City and the Royal Tombs which dot the surrounding countryside.

Where is Hue Imperial City?

Hue Imperial City is on the north side of the Perfume River in Hue, a city in central Vietnam. It’s about 120 km, or 3 hours drive, north of Hoi An.

When was Hue the capital of Vietnam? 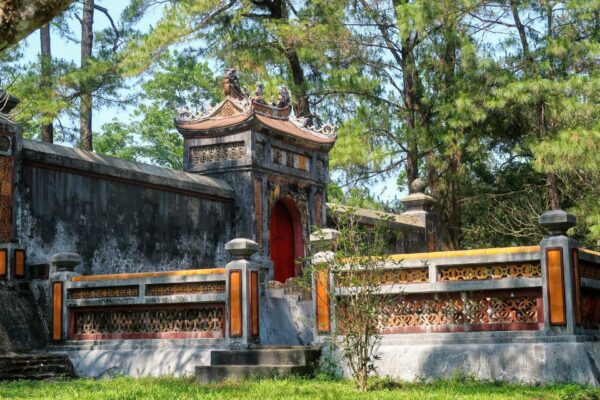 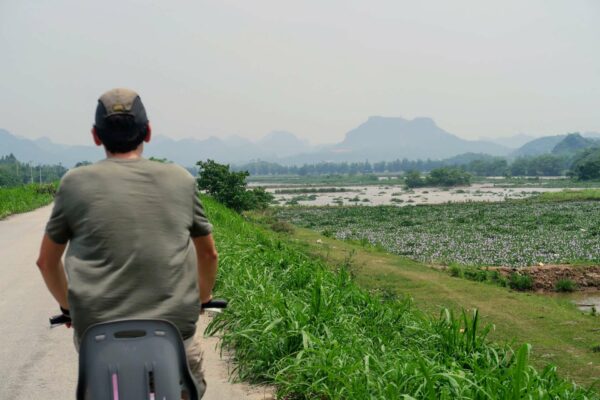 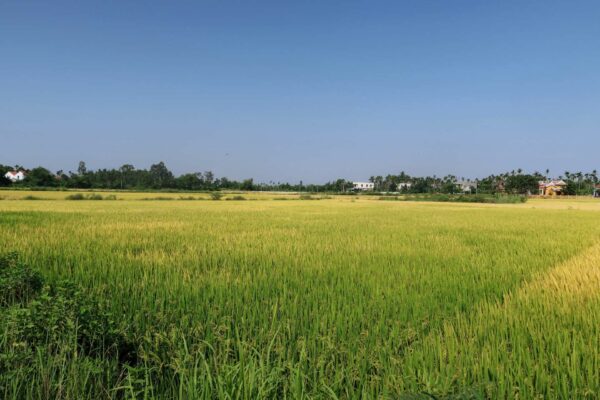 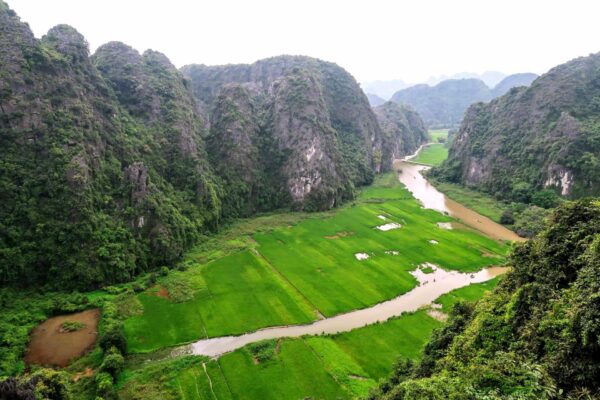 Best Things to do in Ninh Binh