The hike up Pania della Croce Mountain in the Apuan Alps of Tuscany is strenuous yet utterly rewarding, with amazing views and scenery.

This hike starts from the car park in Fornovolasco. It’s a free car park in the centre of the cute little hamlet. From Lucca it takes about 1 hour to drive, with the last section on a narrow, windy road. Alternatively, there is a bus stop in Fornovolasco. The E77 bus leaves Gallicano, down in the main valley, roughly three times a day.

From the car park head across the little stone bridge and turn left to walk along the cute cobbled street by the stream. This trail leads out of Fornovolasco and up to a road. Head straight across the road to the end of the little gravel car park. Here you’ll reach the start of the loop.

We chose to walk right first, or anticlockwise. This meant heading the steeper way up to Foce di Valli, the saddle at the junction between the two loops. The weather was quite misty when we started off, so this gave us the option of only hiking the lower loop if the weather was still awful by the time we reached the saddle. Additionally, it gave us the option of hiking the shorter route straight back down after the higher loop if we were too tired.

Hiking up to Foce di Valli

From the junction turn right, and follow the hiking signs that point towards Foce di Valli (Foce means Saddle). Initially the route follows a wide track, but soon the path leads off to the left, becoming narrow and steep. The path winds upwards through forest, with the occasional glimpse of the rocky mountain ridge intimidatingly high above.

After a while, you reach the treeline and reach open grassland. Look out for the mouflons, a wild mountain sheep thought to be the ancestor of all domestic sheep. They are not that scared of humans and large herds are relatively commonly seen in the area. They’re dark brown with a little white, and the males have rather majestic curled horns.

The path continues ever upwards as you ascend to the grassy saddle or Foce di Valli. Once there, you can see down the other side of the mountain into forested valleys dotted with little villages, and further to the coastline and sparkling ocean beyond. Or, if it’s misty, you won’t see much at all.

We arrived in mist that appeared to be thinning out. This meant we only saw the views when we returned from the high loop quite a few hours later. If it had been clear, we’d have been rather daunted by the long, steep hike up the vertiginous slope above us towards the top of Panie della Croce. However, we couldn’t see it, so we happily set off along the path to the right, again going anticlockwise around the higher loop.

The path itself was initially very easy, if not a little steep. It became trickier about 1 km and 350 m climb further up as the route traverses around a rocky corner. We almost missed the path, so keep your eyes peeled for the red and white hiking signs at the rocks. Walking around this corner, there’s a short section where you have to hold onto chains while walking along the narrow path and scrambling up a few large steps. It’s not technically challenging but also not for those who are afraid of heights.

Hiking to the top of Pania della Croce

After that section, it’s fairly easy, though still steep, walking all the way to the top. Turn left at the next path junction up a rocky valley, and you’ll soon be on the top ridge. From here, turn left to hike along the fairly flat and wide ridge to the cross at the top of Pania della Croce. It’s 1858 metres high, and we were very cold, wearing our hats, gloves and waterproof jackets (in early November). It was quite windy, and amazingly the mist really was beginning to be blown away. We were left with wonderful views along the dramatic ridgeline.

After the top, we rather quickly returned along the ridge and took the path leading left in a few zigzags downwards. The descent is fairly quick, and surprisingly we were soon sweating in the brilliant sunshine. The route heads slightly depressingly very far downwards. Once you reach the bottom you have to hike up again, though this time it’s a gentle climb.

On the way down, within the forest in the distance, you can see the cute Giuseppe del Freo Rifugio (open mid-June to mid-September every day, and weekends for the entire year). You can stay here or eat in the restaurant when it’s open, though it involves a bit of extra climb.

Walking back around the Mountain

Make sure to look out for the path to the left before you reach the very bottom, signposted again Foce di Valli. The path heads gradually back up the slope again and around the mountain. There are a few streambeds to cross before reaching the corner, from where there are great views. You can almost see across to the saddle where the loops intersect, with an impressive ridgeline to its right.

The path between this corner and the saddle is slightly tricky. There are a few places with chains, and some without, with the very narrow path crossing steep dusty and rocky sections. It’s not technically difficult, but you do have to be confident walking across steep slopes.

Soon you’ll be on the ridge just above the saddle, where there are great views of the ridge beyond. Have a break, and decide whether you’re still up for walking along the ridge and then down (6km), or whether you want to head straight back down the way you came (3.7 km). There’s no technical difficulty on the ridge walk. Additionally, after the initial descent, you walk along an easy track all the way back to Fornovolasco.

When you’re ready, head straight onward towards Monte Forato ridgeline. There’s some slight up and down along this route, but not that much. The path is easy to follow and there are great views on both sides. After about 1.5 km, a path comes in from the right. Just further on is one of the highlights of this ridge walk, the Passo dell’Arco, a beautiful natural rock arc.

From here, continue walking along the ridge as it heads downwards to a junction at Foce di Petrosciana. Take the path opposite heading through the woodland. After some steep downhill the path flattens and becomes a track. Keep following the red and white hiking signs to Fornovolasco. In particular, keep an eye out for the path leading off left from the track, This takes you through a nice forest instead of just along the road.

Keep your eyes peeled for the little black and yellow Fire Salamanders – we saw two when hiking through this section of woodland. Don’t lick them because their skin is poisonous. Eventually, after a couple of kilometres of easy walking, you’ll return to where the lower loop started and the road just above Fornovolasco.

Take the path opposite to walk back down by the river and to the car park, the end of the Pania della Croce hike.

Guidebooks to explore more of Tuscany & the Apuan Alps

For another hike in the Apuan Alps, try Monte Tambura or Monte Sagro. Or for more hiking, check out our other walks nearby in Italy. 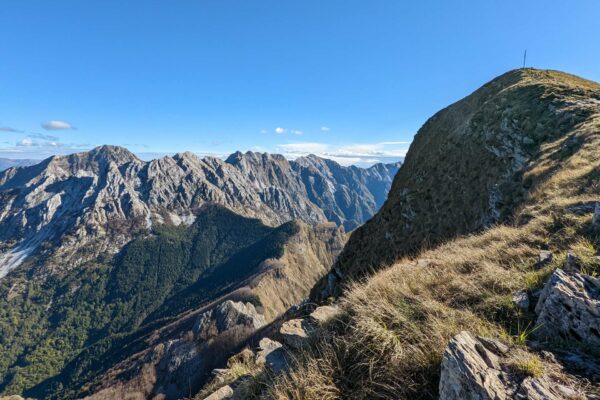 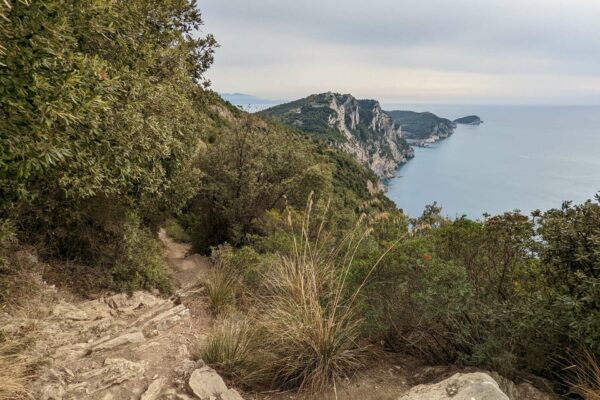