Hike along the Singapore River, cross over to the Rail Corridor and end up in Holland Village for delicious food.

This hike starts at Raffles Place MRT on the Green East-West and Red North-South Lines. Take Exit G from here. This is a one-way hike and leads to Holland Village MRT on the Orange Circle Line or Bueno Vista MRT on the Green and Orange Lines.

From Raffles Place MRT station, take exit G and head towards the river. The first part of this hike follows along the most historic part of the Singapore River with several old colonial buildings on the riverbanks. If you head right for a little way you will have good views of the Fullerton Hotel, while the main hike continues left.

The Fullerton Hotel is a beautiful colonial building, also elegantly lit at night. Built in 1928 to house the main post office and exclusive Singapore Club, it is named after Robert Fullerton, the first governor of the Straits Settlement.

The Cavenagh Bridge just in front also dates from the colonial era, specifically in 1869, and it is one of the oldest bridges in Singapore. A sign at each end still informs the world that cows and horses are not allowed across the bridge!

Head left along Boat Quay, the name given to this section of the river. There are many nice-looking bars and restaurants here which overlook the river, and they’re an atmospheric place to sit in the evenings.

On the opposite bank of the river you’ll see a grand old building, now the Asian Civilisations Museum, constructed over 1864 to 1920 for use as Government Offices in the colonial period. Behind this is another fancy building, the Parliament of Singapore.

Continue along the banks of the river until Elgin Bridge, the first bridge you come to. Cross this bridge and check out the impressive views back across to Boat Quay and the financial centre beyond.

Continue up this side of the river, along Clarke Quay. There are many touristy restaurants and bars here, all slightly tacky. The colourful Clarke Quay mall is entirely pedestrianized and shaded from the sun, part of the redevelopment of this historic riverside area.

On the opposite bank, you’ll see River Point Mall in a slightly dilapidated-looking building. It’s meant to be reminiscent of the warehouses and go-downs that occupied this area in the past.

After walking under the large Clemenceau Bridge, the river becomes quieter and a bit more stylish – think chic brunch spots and fancy restaurants visited by well-to-do locals. The atmosphere is very pleasant, and soon the colourful Alkaff Bridge pops into view.

The designers of the Alkaff bridge made it resemble a tongkang – a type of goods-carrying riverboat common here in days gone by. It’s named after a former dock – the Alkaff Quay – which itself was named after a wealthy Arabian trading family. This colourful bridge dates from 1997.

The character of the Singapore River changes again after Alkaff Bridge. You leave the city centre vibe behind and enter an area of condos and greenery. This area used to be swampland, but gradually boat quays and industries replaced it, before returning to parkland and residential. Soon you enter a stretch called Kim Seng Park.

Tan Kim Seng is a moderately important historical figure in Singapore, which is why there is a park named after him. He arrived in Singapore as already a wealthy businessman in 1840 from across the border in Malacca. He donated to various public endeavours such as schools and hospitals, and notably to help alleviate a serious drought here in 1857.

Shortly after the park, cross the bridge to walk on the other side of the river, along the Alexandra Park Connector. On the left are some derelict colonial-looking buildings. These ramshackle bungalows are the former headquarters of the Singapore Boys Brigade. This is a youth organization formed in 1930, a bit like Scouts and Guides, and still exists but its headquarters are now elsewhere.

The path continues along the river, and we were lucky enough to see a romp of otters swimming in formation down the river.

The otters we’d just seen apparently often hang out in this park. You’ll see lots of signs about the otters, and when we were there a pond was blocked off for their exclusive use. There are also some lovely flowers in this park.

The trail continues between some HDBs are soon you bend left and reach a busy road. Cross the road and head slightly left before turning right, following the PCN (Park Connector Network) signs on the ground.

Connecting to the Rail Corridor

The PCN continues along the side of a small river, and soon you cross another busy road. To reach the Rail Corridor, leave the PCN and walk right along a disused road. It doesn’t look a very likely place and the road is dilapidated, but there are some lovely trees and soon you will see the Rail Corridor up ahead.

Once on the Rail Corridor, head right and for the next two kilometres, the hiking is straightforward with no turns. There’s a very large, dark bridge to pass under, some nice flowers, trees and views of parkland.

After a couple of kilometres walking along the rail corridor, you will see a concrete metro rail above you near the end of this hike. You now have two choices – either head to Bueno Vista MRT station (Green and Orange Lines) just on your left, or turn right out of the rail corridor and across a pedestrian bridge into Holland Village. We went to a cafe (Cafe O) for delicious roti prata, in the centre of Holland Village just by the MRT (Orange Circle Line).

This walk along the Singapore River, especially the first part, can easily be done in the evenings. The route is well-lit and the bars and restaurants come alive when the sun goes down. If you’re there in the evening, you can also take a river cruise with dinner* to see the pretty lights while tucking into delicious seafood.

Guidebooks to explore more of Singapore

To explore more of the area, check out nearby Marina Bay, beautiful Gardens By the Bay or the historic Colonial District. Or, check out a map of more great walks in Singapore.

Where is the Singapore River?

The Singapore River stretches from the Marina Reservoir to roughly 3 km upstream, where it disappears underground.

Can I hike along the Singapore River at night?

Hiking along the Singapore River at night is possible. In fact, nearer Marina Bay, the riverbanks are more atmospheric in the evenings when the bars and restaurants fill up.

Can I swim in the Singapore River? 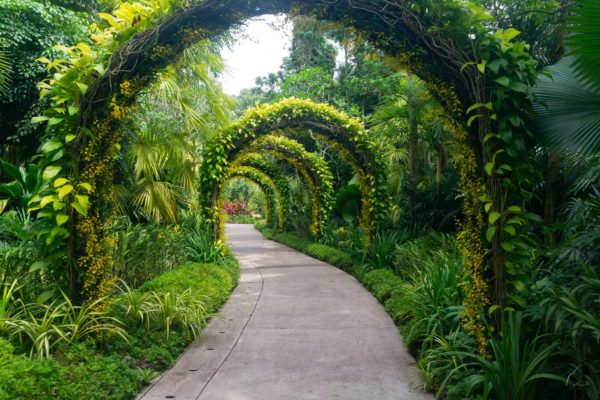 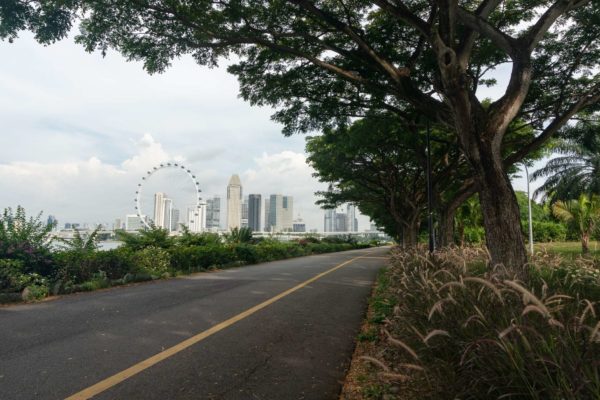 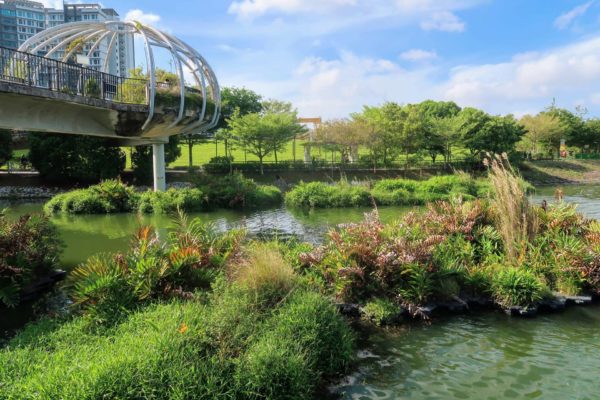