The great lakes of England are here, for you to explore. The Lake District is one of the top hiking destinations in the UK. Wild mountains tower above green fields, lakes and waterfalls. This makes the Lake District deservedly a favourite destination for nature lovers and outdoor enthusiasts. From family-friendly strolls along the lake shores, to mountaineering in the hills, the Lake District has it all.

Quarries and stone circles show that the Lake District was inhabited at least 5,000 years ago. In fact, a quarry near Langdale Pikes, supplied most of the stone for hand axes found all over England. Norse settlers from Viking time probably introduced the Herdwick Sheep, the regions native sheep breed. These sheep are born black, turn brown and then light grey when they get older.

From the 12th century onwards, mining became important, of slate, coal and limestone. In the late 16th century, Lady Anne Clifford, born in Skipton Castle, restored many of her old buildings. here. Canals and then railways reached the Lake District in 1847. This was around the time that the poet William Wordsworth published ‘A Guide to the Lakes’, arguing for the establishment of a National Park. Beatrix Potter, writer of the children’s books The Tale of Peter Rabbit, was another famous inhabitant.

Tourism expanded in the Victoria Era, and many of the fine hotels and related buildings are well-kept examples of Victoria architecture. Today, tourism is still vitally important for the local economy, leading to a wide choice of accommodation, cafes, and restaurants. Though it is the natural beauty of the area that underlies its popularity.

The Lake District is a great place for studying landscapes and rocks, discovering the long history of the region and how the landscape was shaped. You can see many old quarries, and you can go into some slate mines on tours. 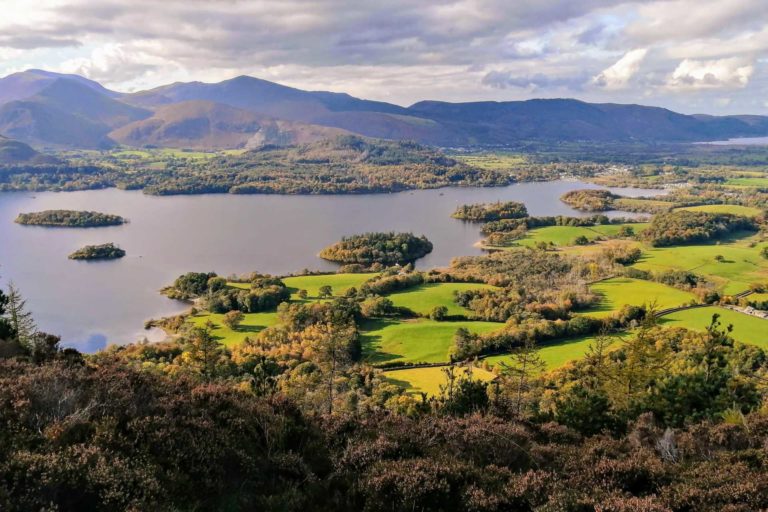 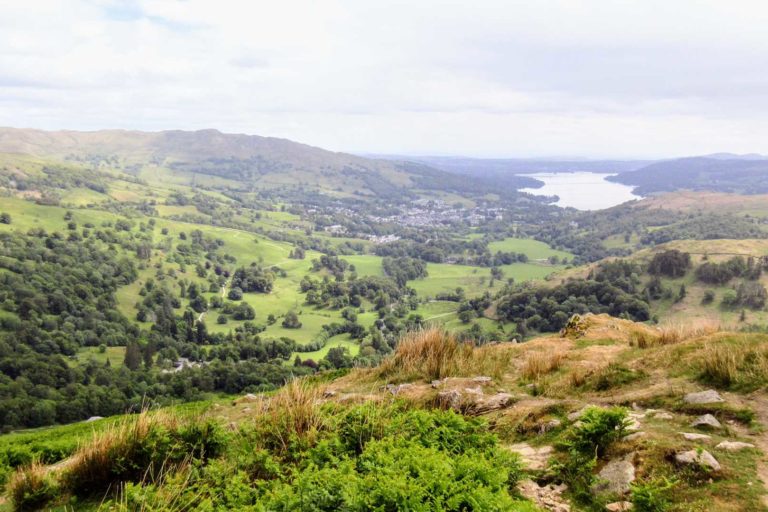 Fairfield Horseshoe
Day Hike - Lake District
⇥ 20 km
⤒ 1060 m
➌ Moderate
This circular walk in the Lake District is easy to get to, starting directly from Ambleside. Though long, there are no technical difficulties, and views over Lake Windermere are stunning. read more

The Lake District is full of activities, no matter your fitness levels. That said, nothing beats a long hike in the fells, and the satisfaction of reaching a high peak. Easier, shorter and flatter, family-friendly hikes can often be found along the lakeshores, where birds abound. Aside from walking, there are many quaint little villages to explore, and delicious cafes to stumble across. Windemere and Ambleside boast the highest concentration of outdoor shops in the UK, and also have cinemas and many restaurants. Driving through the region, along the narrow, windy roads, allows you to explore many different areas, and mountain passes can get you up into the hills.

Weather in the Lake District is notoriously changeable and hard to predict. It can change from bright sunny day, to misty surrounded by clouds and heavy rain in just a few minutes. It’s important to always check the weather forecast before setting out, and make alternative, shortcuts and alternative routes back down incase bad weather sets in.
Summer naturally brings warmer weather, and should give you a higher chance of sunshine, though equally rain and clouds are common. Autumn and Spring can be beautiful, with fresh air and clear skies. The chance of snow on the hills is still high, and can be spectacular. Winter can be very cold, especially high up, and the chance of sudden snow storms needs to be taken seriously. Ice can be common, making paths slippery. That said, visitor numbers are lower, accommodation is cheaper, and views can be spectacular.