Postberg Nature Reserve is gorgeous in flower season. On this hike stroll among the flowers, swim in the lagoon and camp at the beach on this wonderful two-day trip from Cape Town.

Parking for the Postberg Nature Reserve Flower Hike is at the Tsaarsbank Gate in West Coast National Park. Officially you should arrive at this gate before 9 am on the first day of your hike. Allow 1hr30 from Cape Town. If you don’t have a car, check out the options for car hire* from Cape Town.

Neither of the days involves much uphill and the walking is fairly simple. We found the distances to be 13.7 and 8.1 km rather than the advertised 15.5 and 11.8 km. We spent a lot longer hiking the first day, about 6 hours, since this was when we took the most flower photos and we had a break for swimming. On the second day, we only took 2-3 hours to complete the walk as the route is quite short and easy. This leaves time to explore the rest of the park.

After parking, we set off and almost immediately went slightly wrong. After checking MapsMe we made it back to the correct path (we’d walked along the track too far, missing the path branching off, so look out for this).

Back on the right track, a small antelope started running rapidly towards us. Initially, we couldn’t figure out what type of animal it was since it was so far away. We were happy to realise it was only a small bok. It continued sprinting towards us until about 10m away, when it stopped, realized that we were people and not other antelopes (?), then proceeded to bolt away in the opposite direction.

After that initial small route-finding mistake, the path was fairly clear. However we did have to constantly look out for the trail markers. The path climbs up a small hill made of granite. For more geology, see the box below. We saw more flowers and had great views over the lagoon.

Granite blobs form the main hills in the Postberg section of the peninsular. About 500-550 million years ago, blobs of magma rose up through sedimentary rocks below, and solidified underground, near the surface of the earth, forming granite. It was formed at a similar time to the granite you can see on the lower slopes of Table Mountain and Lions Head. Granite is harder and less easy to erode than sedimentary rocks, so the granite blobs remain higher than the surrounding, softer rocks.

Fossilized sand dunes make up the Preekstoel and nearby rocks. The surfaces of sand dunes are slanted, and these are recorded by the lines you can see in the Preekstoel. These sand dunes existed a few million years ago, then became ‘fossilized’ when they were buried by overlying sediments, and calcium-rich water flowed within them, turning the sand into stone. The Langebaan Formation is the name of these old sand dunes beds, which are roughly 2 million years old.

Walking towards the Lagoon

The path descends but doesn’t quite reach the lagoon. Instead, it continues along a track around the edge of the lagoon by some houses. We popped down to the lagoon on a very minor detour and had a lovely, quick swim. The track then heads back inland and up a hill, with more flowers and wonderful views.

From the top of the hill, you can see the Naval Base in distance at the far end of the perimeter. Then the path continues down the other side to the ocean. Eventually, you reach a beach, totally beautiful, wild and deserted.

Get a Guide to Flowers of South Africa*

“Eve’s Footprints” were discovered here on the edge of Langebaan Lagoon in 1995. They are a fossilized set of footprints, dated to 117,000 years ago, which means they are the oldest anatomically human footprints to ever be discovered. And the footprints apparently belonged to a woman. The time she lived coincides with the ‘mitochondrial Eve’ – from our DNA you can tell that the human species passed through a bottleneck when they were only a very few ancestral humans living. So potentially, we are all related to this woman who left her footprints here many, many years ago.

In the park they have also found fossils from sabre-tooth cats, short-necked giraffes, and four-tusked elephants, dating from around 5 million years ago.

One of the first meetings between the Dutch East India Company and the Khoikhoi people is also thought to have taken place in the park.

The campsite is just behind the beach. There were only two other people there, but on the weekends, I think the campsite would get a little crowded. It’s a nice place, with flat grass, braai wood supplied and a fire pit, along with large, clean toilets.

We cooked dinner (pasta with sauce) and went to watch the sunset from the beach. It was slightly windy, but not cold at all at night time.

The next morning we had a breakfast of instant porridge and set off. The day before we’d vaguely planned on swimming in the ocean this morning, but backed out since it was freezing cold.

Birds we saw – black harriers, rock kestrels, black oystercatchers, sunbirds and more. Animals we saw – small antelope (couldn’t figure out exactly what type), bontebok, zebra, many tortoises. On the way back, we saw flamingos and other wading birds from the bird hides near the Geelbek Restaurant.

Obviously, we saw loads of flowers. Lots of daisies and things. That’s a very poor description, but if you’re into flowers, you’ll have fun identifying them yourself. By the Geelbek Restaurant, you can see a totally different ecology – a salt marsh at the edge of the lagoon, with lots of cool algae and other weird-looking mud.

Walking along near the Coast

The hike continues until you reach a car park with toilets. If you’re very tired, take a shortcut and walk less than 1 km along the road back to your car. But the real trail continues along the beach (there were not any signs here so it was quite confusing).

We saw lots of small bluebottle jellyfish washed up, along with other interesting beach stuff and lots of birds. In the distance we spied some signs/posts higher up in the dunes, partially obscured by vegetation, but there was no sign of an actual trail leading between these markers. We walked along the beach and then guessed when the path turns inland to head back.

We guessed a bit too early, so ended up randomly walking through the dunes for a bit, before finding the path back inland, which did exist.

Hiking along the beach and back through the dunes, we saw lots of interesting little things. And then, too soon, we were back at the car, around lunchtime. But didn’t leave the park just yet… find out more in our Guide to West Coast National Park. If you want to stay nearby after (or before) the hike, check out accommodation options in Langebaan*.

Kogelberg & Cape Hangklip is also a great place to explore in flower season, and if you enjoy hiking discover more hikes in South Africa. 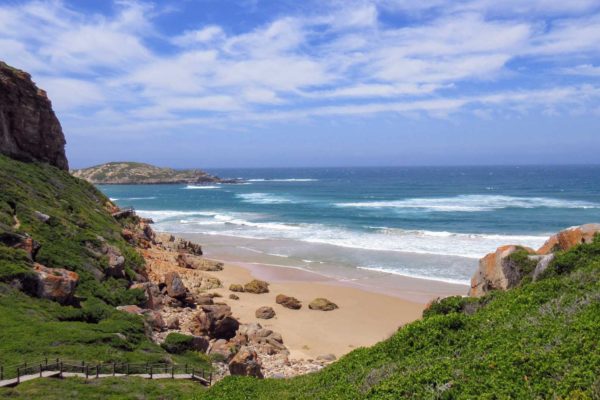 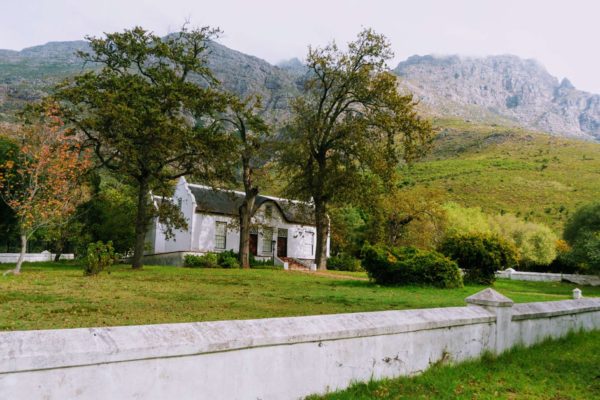 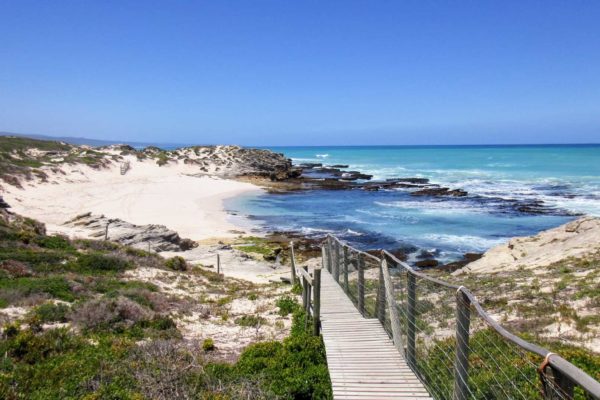 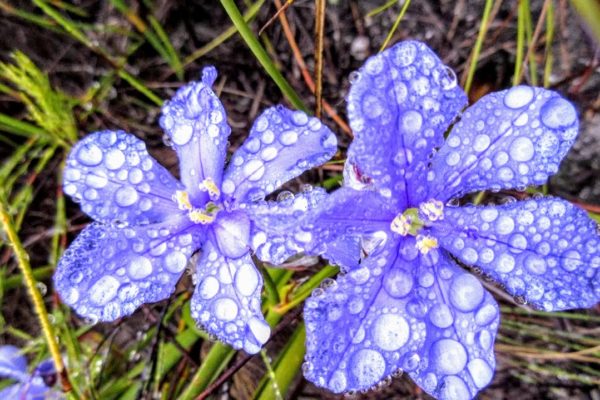