This self-guided walking tour around Rottenburg am Neckar leads you through this super cute medieval town, to towers, timber houses and more.

This walk starts from the central square in Rottenburg am Neckar. Rottenburg Train Station is convenient for this walk, and it’s only a 10-minute ride from Tübingen.

On this self-guided walking tour you’ll see all the main sights and attractions of Rottenburg. It follows the official town walking tour, and you can pick up a leaflet about it in the main square where this walk starts (there should be some in English). This walking tour takes about 1-2 hours to complete.

This walking tour starts from the main square in Rottenburg am Neckar.

The Town Hall is a grand pink building on the square, built in 1735. It’s just next to the tourist information, where you can find a leaflet about the Rottenburg Walking Tour.

The Market Place Fountain is to the right of the Town Hall and is meant to be the most beautiful Gothic fountain pillar in southwest Germany. The original dates from 1483 and is housed in St Moriz Church, while the one on the square is a replica from 1911. The statues show Austrian princes, as this area was part of the Austrian Hapsburg empire for a long time.

Best Places to stay in Rottenburg

Prices for hotels in Rottenburg start around €80 for two people and increase to more than double that. The places below are ordered from lowest to highest price. My top pick is Ferienwohnung Altstadt* as it’s an apartment rather than just a room, is not that expensive and has a great location.

Ferienwohnung Altstadt*: A great entire apartment with a small kitchen right in the heart of the old town near the old town walls.

Hotel Anker Garni*: In a great location close to the river, with nice rooms, friendly staff and a large buffet breakfast.

Hotel Württemberger Hof Garni*: Between the train station and the river, with large atmospheric rooms and a nice breakfast.

Martinshof*: A hotel in an old building near the Episcopal Palace with large, modern rooms and a nice outdoor terrace.

Book a Place to Stay in Rottenburg*

At one end of the square is St Martin’s Church. The first church stood here in the 12th century, with later churches built and extended as previous ones were destroyed or damaged. The unique late Gothic tower, built in the 15th century, is the symbol of Rottenburg.

Directions: Leave the square along the left side of the church and continue along the street.

You’ll soon pass the Kreuzlinger Courtyard Building on your right (now the police station). It was built in 1740 as the administrative centre of local properties owned by the monastery.

Later on your left you’ll see the modern Municipal Library, which opened in 2017. There’s a nice cafe on the ground floor.

The Episcopal Palace is a very grand building on your left just after the library. Built in 1657 by the barons of Hohenberg, it was used as a Jesuit college and high school until the order was abolished in 1773. Afterwards, it was used as an administration centre by first the Austrian government (this area was in the Austrian Hapsburg Empire for a long time), then the regional Württemberg government and finally the Diocese of Rottenburg-Stuttgart.

On your left opposite the palace, you can see the Knight Fountain. He’s dressed in a lansquenet costume (a mercenary soldier from Renaissance times) with a chain around his neck showing membership in the Order of the Golden Fleece (a Catholic chivalric order and symbol of the Austrian Hapsburg Empire).

Further along the street on your right is the Eugen Bolz Memorial. He was a local administrator and then a victim of the Nazis.

Directions: Head back to the Knight Fountain and down the steps through the little passage and into a park. Continue walking through the park.

On your left is the Roman Town Museum, beneath a glass car park. In Roman times there was a town here named Sumelocenna and this museum displays artefacts from that time. Outside in the park you can also see a few Roman monuments.

As you walk through the park, you’ll see remains of the old town wall on your right. Towards the end, some lovely old houses are built into the wall, including the Executioner’s House from the 14th century.

Explore more of the Area

In front of the old houses you can see a wide moat and at the far corner is a well-preserved tower. These served as the city’s defences in the 14th century.

Directions: After the tower, head right and right again. Take the next road on your left into a square.

In this square, you can see the grand, white Tithe Barn, from 1645. This is where the Austrian rulers stored the contributions in kind (or tithe, such as part of the harvest) that they received from the peasants. Since 1983 it’s become a town cultural centre.

Just to the right of the Tithe Barn is the Fool’s Fountain, from 2009. The figures on the column are from the Fasnet (or Carnival Procession) of Rottenburg, such as a witch, jester, and many more.

The Haus am Nepomuk is a delightful collection of colourful timbered houses by the river. You can see a statue of St Nepomuk on the left-most building. St Nepomuk was the confessor of the Queen of Bohemia in the 14th century and was drowned by Wenceslaus IV of Bohemia for refusing to divulge the secrets of the confession.

If you want a break, Cafe Il Mio has a great spot by Haus am Nepomuk and by the river, the perfect place for a rest.

Directions: Cross over the bridge and turn right to walk along the river.

Just after the bridge you’ll pass the St Johann Nepomuk Shrine, followed by the Protestant Church (a neo-Gothic church from the mid-19th century).

The Church of St Moriz dates from 1300, though there have been later modifications such as the tower from 1433. Inside there are some important artefacts including wall frescoes, grave monuments and paintings.

Directions: Head around the church and across the car park to the obvious old house.

The Nun’s House is the oldest house in Rottenburg, dating from 1440. For almost a century it was the house of nuns, Franciscan Sisters, hence its name.

Directions: Turn left towards a junction and a little square.

To the right you can see Kirchberger’s House, a lovely half-timbered house from 1569.

Directions: Walk through the square and right along the little alleyway called Pulverturm.

At the end of the cute street, you’ll come to the Powder Magazine Tower (or Pulverturm). This tower is at the southwest corner of the town’s former inner fortifications and dates from the 14th century.

Directions: Turn right, passing the red and white Vine Dresser’s House on your left before turning left and then right. At the T-junction turn right.

The Capuchin Gate is from the 14th century, though the timbered floors above date from later. After walking through the gate, make sure to turn back around as the gate looks nicer from this side.

Directions: Take the next left to cross the river. At the junction on the other side head straight on slightly left along a cobbled lane heading uphill. You pass under the entrance gate back into town to meet a road, and turn left to bend back towards the gate.

The Kalkweil Gate Tower, like many other city buildings, is from the 14th century. Directly underneath the tower are some steps leading upwards. When the gate on the steps is unlocked you can climb up to the walls and along to the next tower (the Schütte Tower).

Directions: After passing through the gate, head straight on and then right down the hill.

At the T-junction, you’ll see the Holy Spirit Hospital opposite. This building is from the 16th century and used to be a hospital, but is now a retirement home.

Directions: Head left and then take some steps down to your right. At the bottom turn left.

The Hospital Wine Press was first mentioned in the 15th century, but the current building is from 1735, after a town fire destroyed the former construction. Viticulture was very important to Rottenburg in former times, and there were at least nine other wine presses in town.

Directions: Walk up to the wooden wine press building and left through a gate back onto a street. Turn right here.

Soon on your right you’ll see the Diocesan Museum. A Carmelite monastery first stood here in 1281, but the current buildings are from after the town fires of 1644 and 1735. The museum contains religious art from the area, and there’s an important library collection above.

Directions: Continue along the street until a square.

In the middle of the square, you can see the Jewish Memorial, a water feature and column. The first mention of Jewish people in Rottenburg dates from 1286, and for most of the time they lived peacefully with the rest of the community. However, they were persecuted at various times, most recently by the Nazis.

Directions: This is the end of the Rottenburg Walking Tour. Head left to return to the main square, or walk right to the colourful Haus am Nepomuk by the river.

For more things to do in the area, a lovely nearby walk is the easy stroll up to Wurmlinger Chapel, or visit the larger historic city of Tübingen. Not far away from Rottenburg are the two beautiful castles, Hohenzollern Burg and Schloss Lichtenstein. For more walking tours and hikes in Germany, see our Germany hiking page. 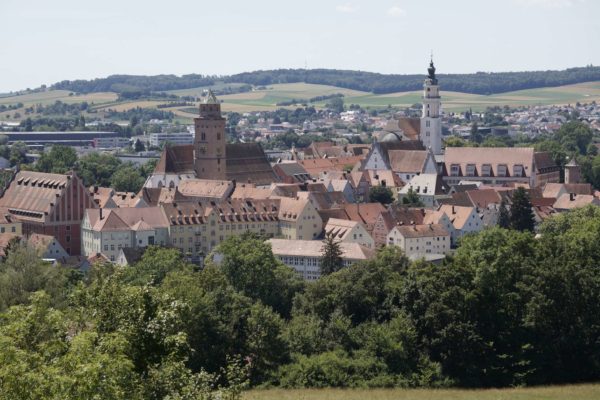 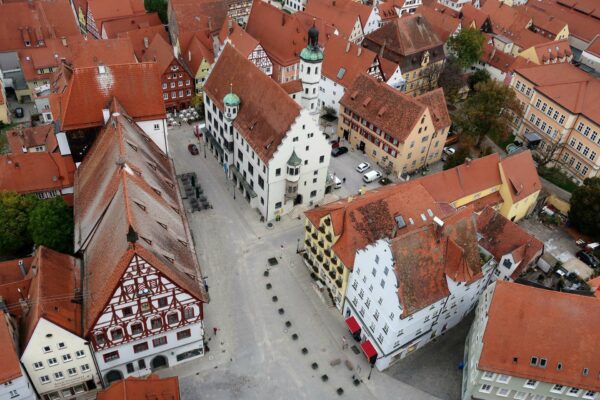 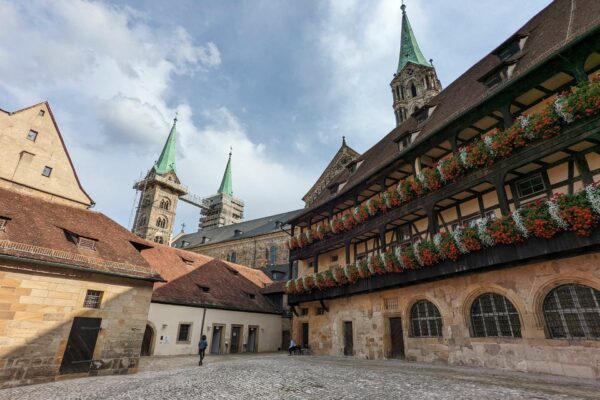 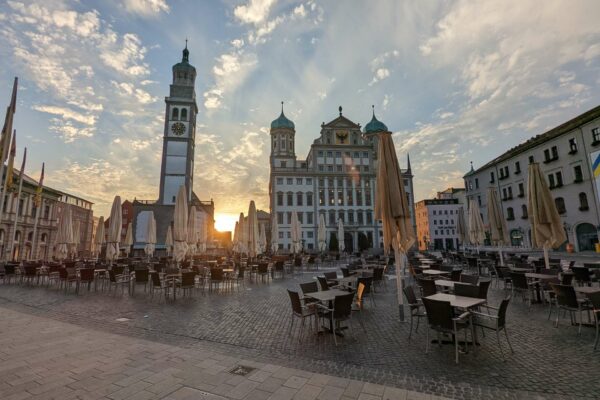